Never leave out inflatables games when planning for a party. There are quite a lot of inflatable toys which are appropriate for an Independent Day party. Let’s go through them blow-by-blow. 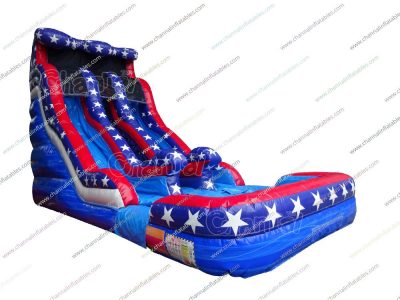 Remember, the Four of July is in summer, so go have fun with plenty of water. How about an inflatable water slide with a theme painted by blue and red colors and white stars. It sounds like a real patriotic fun.

Patriot pluses cowboy, what a strong combination. If you really want to claim that combo, try this US flag inflatable mechanical bull. Make a competition out of it, see who can last the longest.

Who doesn’t like American football? With this inflatable football toss game, you can easily arrange a football game in your backyard. 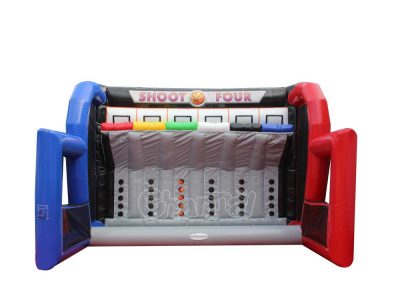 Basketball is another Americans’ favorite sports. This inflatable shoot four basketball game allows 2 players, one stands for blue, another stands for red, to throw basketballs in.

Another popular sports in the states. Inflatable baseball batting game is suitable for both adults and kids in any occasions.

Inflatable hungry hippo is an interesting party game. The goal of winning is to collect the most balls from the central pit. Come to think of it, it’s totally reasonable to switch the balls to something patriot related items, such as five pointed stars.

Inflatable gladiator joust game lets two opponents fight with one another with a pair of blow up joust sticks. You can level it up with two teams (blue team and red team), and see which team wins the most battles.

Want to bring together the kids in your church community or even grow more outreaches? Then you have to... read more

There are many home alone activities to do on Christmas day, include singing, cooking, bouncing, decorating and building a... read more

If you want to throw a soccer themed party for your kids, introduce them to these soccer games to... read more