What is bungee run?

Almost everyone heard about bungee jumping, but there is an another gentle version of the extreme sport called bungee run or horizontal bungee. Bungee run is a bungee game mostly played on an inflatable flooring track, two participators put on bungee harnesses and exert all their strength against the force comes from the elastic cords. 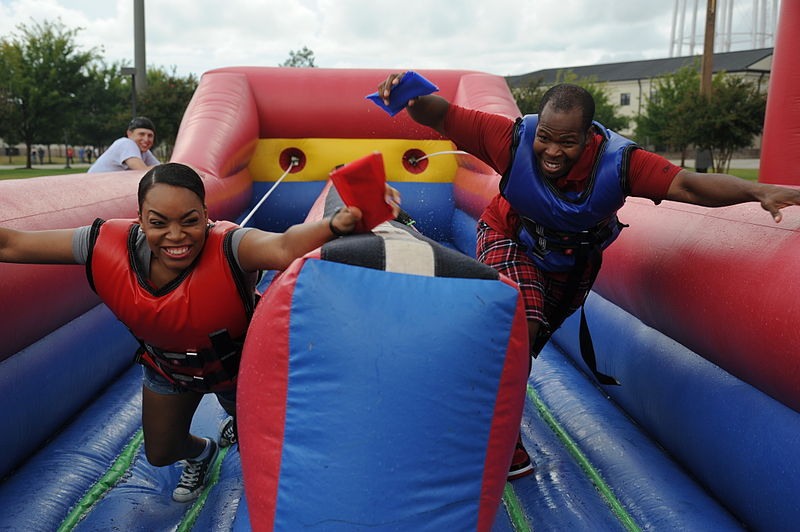 We can play more creative and fun games through bungee run in our backyard parties, indoor and outdoor recreational activities and events, exciting contests with rewards. So what games can we play with bungee run? Below I list some ideas for your information.

This challenge tests players’ strength and stamina. How far can you go before the bungee cord pull you back? Each one will have three chances.

Simply installing a basketball hoop at the end of bungee run lane would tremendously increase the level of fun. Set up a shooting line, only if participants pass that line, they are allowed to shoot balls. It can be a single player’s game, and also fit for team building.

Since we already have bungee basketball, why not football? The idea is simple, you shoot a football into a goal while you struggle with bungee cord. If you lost your balance, you may miss kicking.

This is a competition game between two competitors, the aim is to see who can transfer the most Velcro stickers from one location to another (normally a pool). The objects need to be transferred can be located variously for adding more challenges.

It’s definitely a game that needs teamwork. Each team must has more than two team members, everyone should reach to a certain distance and hand over the relay batons. The first team finish the race wins the game.

It may not have any product in the market yet, but it sounds like a great idea. The game method is two players or teams wear up bungee harnesses that tied together through bungee rope, then pull all their strength to draw another side, all the tug of war are on inflatable arena.

Do you have any ideas that apply to your parties, fun activities or any team matches with using an bungee run? Please share with us.

Want to bring together the kids in your church community or even grow more outreaches? Then you have to... read more

There are many home alone activities to do on Christmas day, include singing, cooking, bouncing, decorating and building a... read more

If you want to throw a soccer themed party for your kids, introduce them to these soccer games to... read more